Consciousness After Death: Strange Tales From the Frontiers of Resuscitation Medicine

Sam Parnia practices resuscitation medicine. In other words, he helps bring people back from the dead — and some return with stories. Their tales could help save lives, and even challenge traditional scientific ideas about the nature of consciousness.

“The evidence we have so far is that human consciousness does not become annihilated,” said Parnia, a doctor at Stony Brook University Hospital and director of the school’s resuscitation research program. “It continues for a few hours after death, albeit in a hibernated state we cannot see from the outside.”

Resuscitation medicine grew out of the mid-twentieth century discovery of CPR, the medical procedure by which hearts that have stopped beating are revived. Originally effective for a few minutes after cardiac arrest, advances in CPR have pushed that time to a half-hour or more.

New techniques promise to even further extend the boundary between life and death. At the same time, experiences reported by resuscitated people sometimes defy what’s thought to be possible. They claim to have seen and heard things, though activity in their brains appears to have stopped.

It sounds supernatural, and if their memories are accurate and their brains really have stopped, it’s neurologically inexplicable, at least with what’s now known. Parnia, leader of the Human Consciousness Project’s AWARE study, which documents after-death experiences in 25 hospitals across North America and Europe, is studying the phenomenon scientifically.

Parnia discusses his work in the new book Erasing Death: The Science That Is Rewriting the Boundaries Between Life and Death. Wired talked to Parnia about resuscitation and the nature of consciousness. 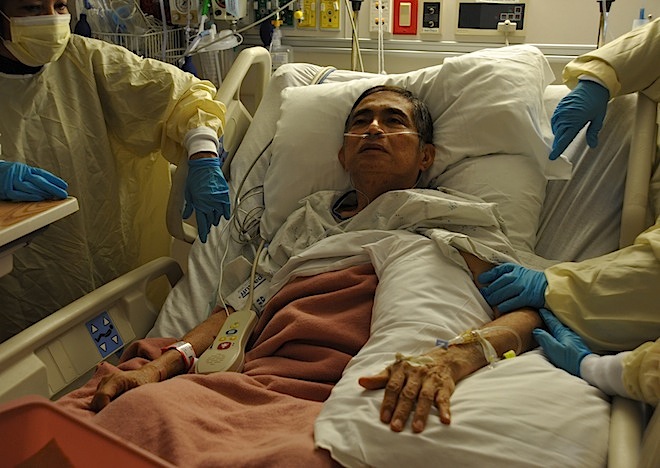 Wired: In the book you say that death is not a moment in time, but a process. What do you mean by that?

Sam Parnia: There’s a point used to define death: Your heart stops beating, your brain shuts down. The moment of cardiac arrest. Until fifty years ago, when CPR was developed, when you reached this point, you couldn’t come back. That led to the perception that death is completely irreversible.

But if I were to die this instant, the cells inside my body wouldn’t have died yet. It takes time for cells to die after they’re deprived of oxygen. It doesn’t happen instantly. We have a longer period of time than people perceive. We know now that when you become a corpse, when the doctor declares you dead, there’s still a possibility, from a biological and medical perspective, of death being reversed.

Of course, if someone dies and you leave them alone long enough, the cells become damaged. There’s going to be a time when you can’t bring them back. But nobody knows exactly when that moment is. It might not just be in tens of minutes, but in over an hour. Death is really a process.

'The idea that electrochemical processes in the brain lead to consciousness may no longer be correct.'

Wired: How can people be brought back from death?

Parnia: Death is, essentially, the same as a stroke, and that’s especially true for the brain. A stroke is some process that stops blood flow from getting into the brain. Whether it’s because the heart stopped pumping, or there was a clot that stopped blood flow, the cells don’t care.

Brain cells can be viable for up to eight hours after blood flow stops. If doctors can learn to manipulate processes going on in cells, and slow down the rate at which cells die, we could go back and fix the problem that caused a person to die, then re-start the heart and bring them back. In a sense, death could become reversible for conditions for which treatments become available.

If someone dies of a heart attack, for example, and it can be fixed, then in principle we can protect the brain, make sure it doesn’t experience permanent cellular death, and re-start the heart. If someone dies of cancer, though, and that particular cancer is untreatable, then it’s futile.

Wired: Are you talking about bringing people to life days or weeks or even years after they’ve died?

Parnia: No. This is not cryogenics. When you die, most of your cell death occurs through apoptosis, or programmed cell death. If your body is cold, the chemical reactions underlying apoptosis are slower. Making the body cold slows the rate at which cells decay. But we’re talking about chilling, not freezing. The process of freezing will damage cells.

Parnia: I decided that we should study what people have experienced when they’ve gone beyond cardiac arrest. I found that 10 percent of patients who survived cardiac arrests report these incredible accounts of seeing things.

Not just my study, but four others, all demonstrated the same thing: People have memories and recollections. Combined with anecdotal reports from all over the world, from people who see things accurately and remember them, it suggests this needs to be studied in more detail.

Wired: One of the first after-death accounts in your book involves Joe Tiralosi, who was resuscitated 40 minutes after his heart stopped. Can you tell me more about him?

Parnia: I wasn’t involved in his care when he arrived at the hospital, but I know his doctors well. We’d been working with the emergency room to make sure they knew the importance of starting to cool people down. When Tiralosi arrived, they cooled him, which helped preserve his brain cells. They found vessels blocked in his heart. That’s now treatable. By doing CPR and cooling him down, the doctors managed to fix him and ensure that he didn’t have brain damage.

When Tiralosi woke up, he told nurses that he had a profound experience and wanted to talk about it. That’s how we met. He told me that he felt incredibly peaceful, and saw this perfect being, full of love and compassion. This is not uncommon.

People tend to interpret what they see based on their background: A Hindu describes a Hindu god, an atheist doesn’t see a Hindu god or a Christian god, but some being. Different cultures see the same thing, but their interpretation depends on what they believe.

Wired: What can we learn from the fact that people report seeing the same thing?

Parnia: At the very least, it tells us that there’s this unique experience that humans have when they go through death. It’s universal. It’s described by children as young as three. And it tells us that we should not be afraid of death.

Wired: How do we know after-death experiences happen when people think they do? Maybe people misremember thoughts from just before death, or just after regaining consciousness.

Parnia: That’s a very important question. Do these memories occur when a person is truly flatlined and had no brain activity, as science suggests? Or when they’re beginning to wake up, but are still unconscious?

The point that goes against the experiences happening afterwards, or before the brain shut down, is that many people describe very specific details of what happened to them during cardiac arrest. They describe conversations people had, clothes people wore, events that went on 10 or 20 minutes into resuscitation. That is not compatible with brain activity.

It may be that some people receive better-quality resuscitation, and that — though there’s no evidence to support it — they did have brain activity. Or it could indicate that human consciousness, the psyche, the soul, the self, continued to function.

Parnia: When you die, there’s no blood flow going into your brain. If it goes below a certain level, you can’t have electrical activity. It takes a lot of imagination to think there’s somehow a hidden area of your brain that comes into action when everything else isn’t working.

These observations raise a question about our current concept of how brain and mind interact. The historical idea is that electrochemical processes in the brain lead to consciousness. That may no longer be correct, because we can demonstrate that those processes don’t go on after death.

There may be something in the brain we haven’t discovered that accounts for consciousness, or it may be that consciousness is a separate entity from the brain. 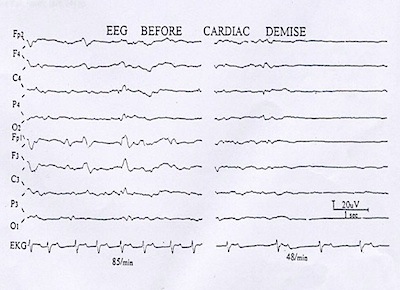 Wired: This seems to verge on supernatural explanations of consciousness.

Parnia: Throughout history, we try to explain things the best we can with the tools of science. But most open-minded and objective scientists recognize that we have limitations. Just because something is inexplicable with our current science doesn’t make it superstitious or wrong. When people discovered electromagnetism, forces that couldn’t then be seen or measured, a lot of scientists made fun of it.

Scientists have come to believe that the self is brain cell processes, but there’s never been an experiment to show how cells in the brain could possibly lead to human thought. If you look at a brain cell under a microscope, and I tell you, “this brain cell thinks I’m hungry,” that’s impossible.

It could be that, like electromagnetism, the human psyche and consciousness are a very subtle type of force that interacts with the brain, but are not necessarily produced by the brain. The jury is still out.

Wired: But what about all the fMRI brain imaging studies of thoughts and feelings? Or experiments in which scientists can tell what someone is seeing, or what they’re dreaming, by looking at brain activity?

Parnia: All the evidence we have shows an association between certain parts of the brain and certain mental processes. But it’s a chicken and egg question: Does cellular activity produce the mind, or does the mind produce cellular activity?

Some people have tried to conclude that what we observe indicates that cells produce thought: here’s a picture of depression, here’s a picture of happiness. But this is simply an association, not a causation. If you accept that theory, there should be no reports of people hearing or seeing things after activity in their brain has stopped. If people can have consciousness, maybe that raises the possibility that our theories are premature.

Wired: What comes next in your own research?

Parnia: In terms of resuscitation, we’re trying to non-invasively measure what happens in the brain, in real-time, using a special sensor that allows us to detect any impending danger and intervene before extensive damage is done.